Brugada syndrome: the scientific uncertainties, the certainties, and the repeated exultation of the web.

“Every discovery is made more than once and never all at once…. “(S. Freud)

In the last few days, the web has been abuzz again, fuelling the expectations of patients (or presumed patients) and their families, ‘webnauts’ with many doubts and in search of hopeful ‘certainties’ about causes, cures and therapies.

A Google search is enough to get an idea of what is going on: 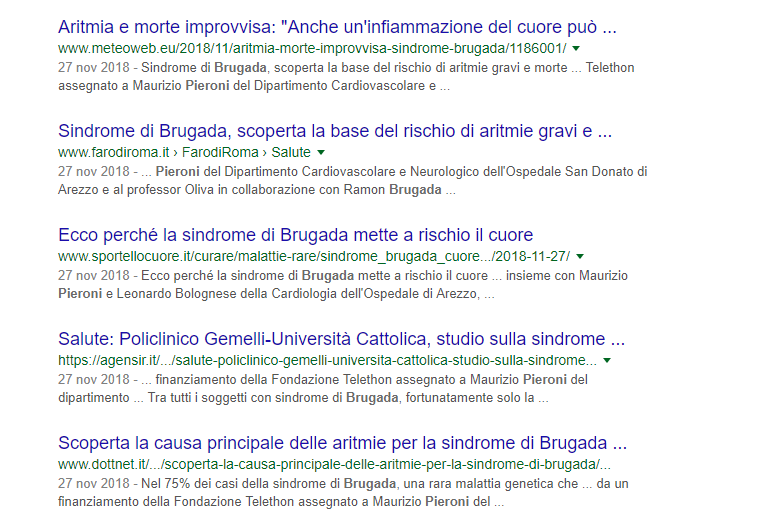 A similar exultation of the web had already been seen a few months ago, coinciding with another important publication, in the ‘Journal of the American College of Cardiology’, by the group of Pappone, Brugada and colleagues[2]: 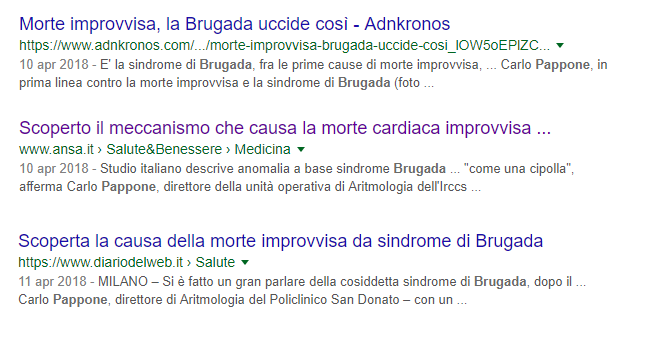 Let us try to clarify how things really stand, beyond the ‘easy’ enthusiasm of the web.

Since the description of the Brugada brothers in 1992, the cause of Brugada syndrome has been attributed to a functional disorder of a structurally healthy heart [3].

In later years, this theory was strongly supported by the excellent experimental studies of Yan and Antzelevitch[22][23]. According to these studies, it was hypothesised that a disease of the “ion channels” leads to an abnormal repolarisation, caused by a genetically induced reduction of the sodium current, which would result in the ecg with the typical manifestations of J-point elevation and ST-segment elevation. According to this theory, the electrophysiological mechanism of arrhythmias is based on a functional phase 2 re-entry mechanism linked to inhomogeneous repolarisation between the endocardium and epicardium. The loss of normal repolarisation of the action potential in epicardial cells, but not in endocardial cells, would lead to a marked transmural dispersion of repolarisation and refractoriness, responsible for a vulnerable window that would facilitate a re-entry circuit resulting in a repetitive ventricular arrhythmia. This hypothesis is further supported by the identification in 1998 of mutations in the SCN5A gene, which codes for the cardiac sodium channel, and the transient and variable nature of electrocardiographic manifestations in patients with Brugada syndrome [4][5].

The functional theory has for years been embraced by the majority of the scientific community, despite the fact that the results of experimental laboratory studies have had limited correlation with clinically based evidence and despite the fact that the cause-and-effect relationship between mutations in the SCN5A gene and Brugada syndrome has not been clarified, mainly due to the low prevalence of affected patients carrying the genetic defect (approximately 25%)[6].

What is, to say the least, singular, is that for years scientific publications have proliferated all over the world reporting the functional theory as the pathophysiological explanation of the syndrome, practically ignoring almost completely the results of the studies carried out in the first description of the syndrome by the Italian group of Prof. Nava, Martini and colleagues back in 1988/89[7][8][9].

The Italian authors were the first to describe the association between cardiac arrest and the peculiar electrocardiographic appearance, also demonstrating the pathophysiological mechanism: an organic, genetic disease, linked to alterations in the right ventricular outflow tract (RVOT) and/or the conduction system, capable of explaining both the electrocardiographic pattern and the ventricular electrical instability. Of relevance, the demonstration that the ST segment elevation is due to a delayed depolarization in the RVOT: “It is not easy to accept that ST segment elevation is due to depolarization abnormalities in the RVOT area, but the presence of late potentials cannot be ascribed to anything else but this”[7][8][9]. 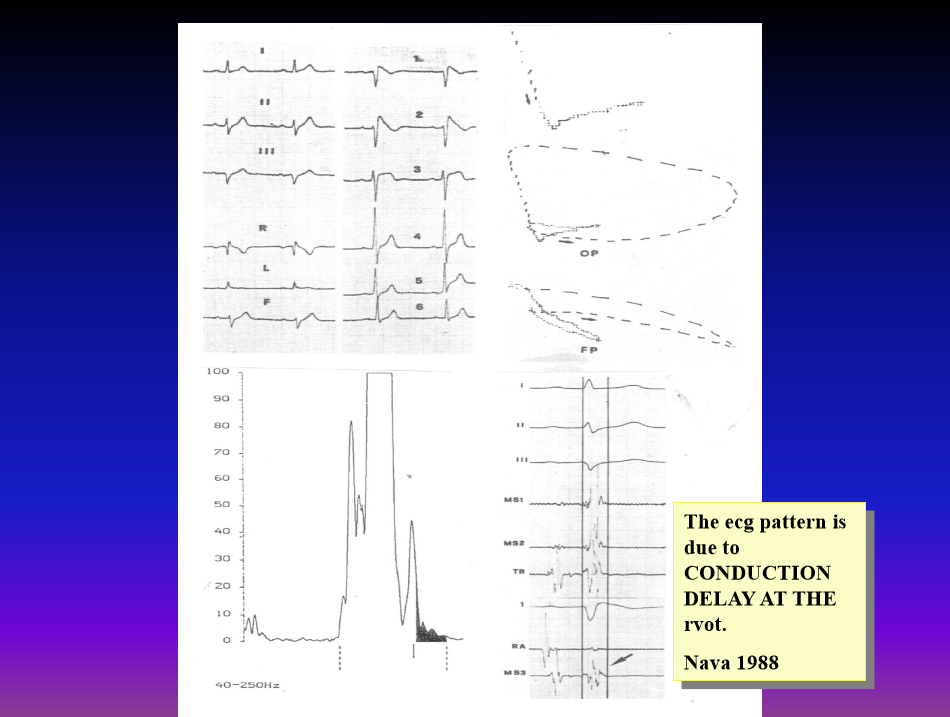 Of note, the Italian authors later pointed out that one of the patients in their initial report[8], who underwent necropsy, had structural abnormalities of the right ventricle as well as mutations in the SCN5A gene, which were also present in members of his family[9]. In addition, a patient from the series by Martini, Nava and colleagues, later republished by Corrado and colleagues[10], was an excellent example of a dynamic electrocardiographic pattern over time, but with anatomical evidence of right ventricular cardiomyopathy. Subsequent studies have shown that even patients with clear structural cardiac abnormalities can present dynamic electrocardiographic patterns, probably influenced by the autonomic nervous system[11][12][13].

Subsequently, over time, several studies have correlated evidence of structural abnormalities of the right ventricle with the typical electrocardiographic manifestations of the syndrome[10][14][15][16][17].

In recent years, the use of intracardiac electrophysiological study with epicardial and endocardial mapping has confirmed the presence of signs of delayed ventricular conduction with fragmented electrograms and delayed potentials, mainly in the area of the right ventricular outflow tract (RVOT)[18]. Another important piece of evidence in this regard is that treatment by radiofrequency ablation of these abnormal substrates leads to normalisation of the ECG in Brugada pattern carriers, and appears to prevent the occurrence of arrhythmic episodes of ventricular tachycardia/fibrillation either spontaneously or upon induction by programmed electrical stimulation in patients with these disorders. To date, such treatment is considered for patients with recurrent ventricular fibrillation episodes[20][21]. Confirmation of the association between the abnormal substrate revealed by electroanatomical mapping and cardiac structural abnormalities was provided by the results of a multicentre study conducted by Nademanee and colleagues, who demonstrated the presence of fibrosis, and reduced expression of the cellular “communicating junctions” of the Cx43 protein in the right ventricular outflow tract (RVOT) area, in sudden cardiac death patients with a family history of Brugada syndrome who did not show clinical signs of cardiac structural abnormalities[21].

In recent months, the world of the web has been abuzz with enthusiasm, with a proliferation of news about new discoveries on the causes and cures for a disease about which, unfortunately, there is still a certain degree of uncertainty, starting with the diagnostic criteria and ending with safe therapies and the underlying pathophysiological causes. This took place in the context of the publication of two important recent studies by the group of Pappone et al.[2], first, and the group of Pieroni and colleagues later[1].

Both studies show that the syndrome is based on a pathological substratum of structural origin, mainly located in the area of the right ventricular outflow tract (RVOT). These studies further confirm what was already highlighted 30 years ago by the group of Prof. Nava and colleagues, who first described the syndrome, and which for years was given little consideration[7][8][17].

In addition, both studies offer important new insights that could, if confirmed by future investigations, be of help both in the stratification of arrhythmic risk and in new treatment options. The results of these studies, in fact, show a relationship between the extension of the pathological substrate and an increased arrhythmic risk in patients affected by the syndrome. In addition, the research by Pieroni and colleagues shows that myocardial inflammation may play a role in causing myocardial fibrosis, and that the degree of inflammation may be related to the extent of the abnormal substrate. This may also pave the way for ‘novel’ therapeutic approaches in the future, such as the use of anti-inflammatory therapy. However, it is still too early to draw conclusions until further clinical and histopathological studies confirm the hypothesis of a link between an inflammatory process and the presence of myocardial fibrosis in patients with Brugada syndrome, a condition that is still searching for a cause[6].

At this historic time of scientific uncertainty, both as regards methods of diagnosis and treatment, but also as regards accurate stratification of arrhythmic risk, a more serious and rational approach is needed, avoiding the viral dissemination of news that gives certainty and feeds the expectations of patients (or presumed patients) who, for various reasons, especially psychologically, are involved. On the contrary, it is important to adopt a serious approach of rational reassurance based on current evidence, with regard to a pathology that seems to explode in diagnoses, involving a large number of people, but which, in fact, remains a rare disease and is still searching for its identity.

[9] Martini B, Nava A, 1988-2003. Fifteen years after the first Italian description by Nava-Martini-Thiene and colleagues of a new syndrome (different from the Brugada syndrome?) in the Giornale Italiano di Cardiologia: do we really know everything on this entity? Ital Heart J. 2004 Jan;5(1):53-60.

Awareness of the Brugada